Any idea on this subject? 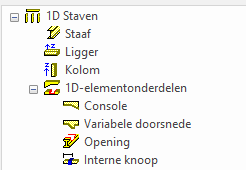 Hi Johan, this is indeed not yet supported unfortunately.

Would it be possible in your case to split the beams into several smaller sections, such that the internal node is actually just the start / end node of each of these subsections?

yes that is a workaround that I used. It does however increase the complexity of parsing etc. as we would now be working with multiple beams.

Ye I can imagine… I will open a feature request.

@Johan_Tuls I’m looking into adding internal nodes on a member 1D, however I cannot get it to work through XML. When I create a simple beam with an internal node and export the XML, the node is converted to a floating node when updating the model using the exported XML. Did you manage to get this to work perhaps?

I do manage to get a (fixed) cross-link to work, would this solve your issue as well?

Hi Kevin,
A cross-link would also work. I made a workaround to split the beam into two parts using a string to define whichs “beams” belong to the initial “main beam” and when parsing I use the reversed logic to connect the results to the original beam.

It is however much less complex if the beams could remain one entity instead of 2-3. So a cross-link would work (connect two beams with one another)